There’s a poster stuck on the wardrobe in my bedroom; one of those ‘motivational’ things that do the rounds on TwitFace and other such places. I first came across it via our fundraising manager at work, who had it on the wall in front of her desk. It’s a list of 29 ways to stay creative. 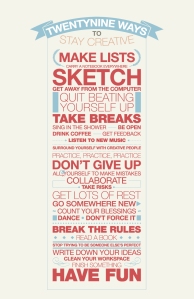 Nothing on the list is particularly new, but two things stuck out for me – so much so that they’ve formed the basis for the closest I’ll get to a New Year’s resolution for 2014. I say ‘resolution’; it’s not so much a resolution as a rule of life I intend to live by.

Along with tips such as “sing in the shower”, “dance” and “drink coffee” (no urging needed on that front!), the poster also urges you to “allow yourself to make mistakes” and to “quit beating yourself up”. It’s from these two that I’ve derived my rule of life for 2014. You could sum it up in three words: DEATH TO PERFECTIONISM.

We’re all our worst critics. As someone put it at a creative writing workshop I once attended, “We’ve all got that little demon sitting on our shoulders, telling us we’re crap”. Well, I’m done listening to mine. Done with expecting to get things right at my first attempt, and especially with getting frustrated and angry when I can’t pick something up. Of course I’m going to do my best and aim to do well at stuff, but no-one ever gets something completely right first time round (or second, or even third). Stressing yourself out over it helps nobody.

So, with that in mind, George Luke is hereby permitted:

Do feel free to adopt this as your New Year’s resolution, if need be. And remember – if at first you don’t succeed, breathe slowly and do it again.