It’s now been a good few days since I ‘de-camped’ from Cheltenham and took the train back to London – feeling absolutely shattered but also inspired, elated and, dare I say it, turbo-charged from Greenbelt.

It was a much scarier Greenbelt than usual for me this year – mainly because I’d accepted the major responsibility of booking acts for the Performance Cafe. The rest of the team were incredibly supportive, and made my debut as a festival booker a great learning experience (special thanks to Roger, the venue manager).

Naturally I’m biased, but that doesn’t make it any less true when I say that the Performance Cafe’s lineup this year was absolutely brilliant. The lady I sat next to during Eska‘s set couldn’t stop talking about how wonderful she was (another bloke sitting next to me said simply, “She’s a genius.”). I felt immensely proud to hear people raving about Lanre. Jason Carter was great on Friday – and given the awful road accident he’d been in just a few days before, we were all just glad he was alive and able to play. Having him on just before Duke Special yielded an unexpected bonus; it turns out they’re both old friends, and Duke talked him into joining him onstage during his set. The little I saw of Rob Halligan was great, as was Paul Bell – and Folk On were wee-yourself funny. Mainstage highlights included the Gentlemen’s Dub Club, the IDMC Gospel Choir and Extra-Curricular. And Monday’s lineup: Ron Sexsmith, Kate Rusby, Iain Archer, the Unthanks and Mavis Staples, with you-know-who playing records in the changeover periods between each act.

There wasn’t a working Press room this year as there had been previously, so whenever I wanted to interview someone, I had to go up to them and ask. I still got a few cracking ones, though: with Brian McLaren, the Dalit human rights campaigner Vincent Manoharan, comedian Andy Kind, Rob Halligan and Shane Claiborne (actually, the last two had been pre-arranged). And Luke Leighfield – if you’re reading this, I owe you an interview!

I didn’t get to as many talks as I’d have liked to (I even managed to go through the whole festival with just a fleeting glimpse of Rob Bell), but really liked Brian McLaren’s talk on Christian identity. I did much better on the comedy front – what with Last Orders most nights, and Folk On playing the Performance Cafe. It was also good to catch up with my old friend Jo Enright again, and hear her jokes about knitting.

Greenbelt gave me ample opportunities for putting real faces to the names of people I’d developed friendships with via Twitter and Facebook. Helen (aka Fragmentz) was a great camping neighbour. And it was fun helping Karen get settled on her first Greenbelt (you can see some of her Greenbelt experience here). Catching up with old friends was also great – especially seeing Matt and Trish Hart again after about 10 years (I first met them in Ecuador in 2001, when I worked for a couple of months at Orphaids – the HIV/Aids care charity Matt’s parents set up). It was good to catch up with both the Akinsiku brothers (Siku and Akin, co-authors of the Manga Bible) and their families.

What else was good? Nadia Bolz-Weber’s communion service message, the morning worship sessions in the Methodist tent, my first Goan fish curry (I didn’t do Pie Minister this year)… and of course, DJing on the Mainstage on Monday night. Hanging out in the beer tent until 3am on the last night of the festival was a first for me; I usually go straight to bed after Last Orders; I never realised they had so much fun there!

Thanks once again to Greenbelt, for a great weekend and another reminder of how rewarding it can be to step out of one’s comfort zone and do something that stretches you. 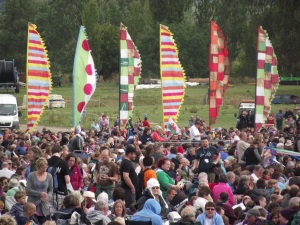 Sunday morning, and the communion crowd starts to gather…