When Operation Christmas Child (the charity that mobilises schoolkids across the UK to fill shoeboxes with gifts for kids in poorer countries) asked me to accompany a team of theirs on a trip abroad, I jumped at the chance. Well, why wouldn’t I? The last time they did, I’d ended up spending ten days in Swaziland, so what’s not to like? Well, maybe the fact that this time round, we weren’t going to Africa but somewhere distinctly less sunny: the Ukraine.

Well, at least I got some sunshine on the way here, thanks to the 20-minute change of plane in Istanbul. But as soon as we touched down in Simferopol (in Crimea), it was back to brass monkeys again.

Anyway, that was yesterday. It’s now Monday – the first day of a short trip for which I’m on story-gathering duty. From our base in Simferopol, we headed south to Bahchisaray – the six of us who flew in from London the day before, plus Sergei, Irina (Ira for short) and Marina, our three translators.

It got less snowy (but not necessarily warmer) the further we drove out of Simferopol. The first thing that caught my attention as we neared Bahchisaray was the huge mountain range in front of us: a stunning row of what looked like enormous limestone cliffs, on which several centuries’ worth of erosion had done some awesome sculpting.

Our first stop was Sakalina, a village on the road that leads to Bahchisaray, and further on to Yalta (where Churchill, Roosevelt and Stalin famously met in 1945 to plan Hitler’s final defeat). ”It’s the last village in this area,” says Igor, the church pastor who’s coordinating the gift distributions we’re observing today. “Many years ago, there were a lot of different nations living here.

“People are very poor here. On the way here, you see lots of empty fields, all bare. As far as prospects for young people go, in this village there’s probably tourism – that is, if young people are prepared to stay here and work at it. There’s a great canyon that you can see as you travel on your way here; there’s also a waterfall and other mountains. These are all places we could bring tourists to; young people could earn money that way. For the most part, young people here tend to stay here. Those who have rich parents who can pay for them to be educated in big cities leave and go to either Sevastopol or Simferopol to be educated.”

In Sakalina we visited an ‘internat’ (a sort of cross between a boarding school and an orphanage) which caters for both orphans and children from dysfunctional families. On arrival, we were greeted by Alexandria (the assistant director of the internat) and Sergei, the student president. Alexandria’s been working here 20 years (“We don’t work here,” she informs us. “We live here.”). The school celebrated its 50th anniversary last year. The kids are very hands-on in the running of the place.

Out in the playground, David (our photographer) and I are accosted by a handful of young lads aged between 11 and 15. they’re all keen on footy; some support local Crimean teams, a few of them like Dynamo Kiev – but as far as Premiership teams go, there’s a lone Arsenal fan and not much else (in fact, there’s a big thumbs down when Man U is mentioned!). They’re also big fans of hip hop music. Eminem gets quite a few name checks.

The assembly hall resembles a small cinema (folding cinema seats tend to crop up in all the places we visit). We’ve brought 19 big boxes with us – each of which contains 10 shoeboxes. In the assembly hall, Alexandra introduces us, Trevor talks about why we’re here, and then Igor addresses the kids, and they’re shown a puppet show telling the Christmas story. Then the gifts are handed out, to much jubilation. A couple of kids are up for chatting after getting their shoeboxes, so we chat. 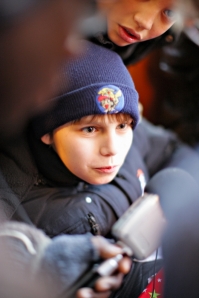 Kirill (left) is twelve and loves Dynamo Kiev and Barcelona. He’ll be leaving school in four years time, and ultimately wants to study medicine. “I want to be the man who gives presents like these to other children.” he says.

I then made friends with 14-year-old Gena (pronounced “gee-yana”). He’d opened his shoebox and found a set of juggling balls inside – and, it turns out, was quite a skilled juggler! “My big brother taught me,” he said, then proceeded to help me brush up on my crap juggling skills. “It’s all in the hands. Put two of them in one hand and just start throwing – like this.”

It’s kind of a cliché for people who travel a lot to say “Aw, people in poor countries; they don’t have much, but they’re so giving.” But it’s a cliché because it’s true… and I was about to get a reminder of that from Gena. After spending a few minutes trying unsuccessfully to get me to juggle properly, he handed me the balls and said they were his gift to me. He then disappeared for a few minutes and returned with a notebook. Since he’d already told me earlier that he liked writing poems, I reckoned that it was his poetry notebook and he wanted my autograph. Wrong – he was giving it to me as another gift! Part of me feels like I’m robbing the kid!

After lunch, then set off for the second distribution of the day, in a village called Verhorechye (“the village on the end of the line”). This is one of many places in Eastern Europe that got left behind when Glasnost happened. In the days of the old regime, the village thrived. It was a huge tobacco growing area; it also produced lots of fruit and a thriving bee-keeping industry. All that went into steady decline from 1991 onwards. (“We were okay for about nine years after that, but now there’s nothing here.”) These days, the village’s only employer is a military storage centre. The mum in the last house we visit works there as a book keeper – but, she tells us, the word is that centre is set to close soon.

The apartment buildings we visit resemble a run-down council estate. An extremely manky run-down council estate (that’s “the projects” for any Americans reading this). The apartments have back gardens, but even these look bleak. I see a watering can tree in one of the back gardens; two floors up, I can see an old bathtub abandoned in someone’s veranda. The place looks grim. Later on, I ask Igor why he chooses to stay and work in such a place with no prospects. His answer is simple: “God has called me to be here.”

We visited a couple of homes and met a few of the families whose kids will receive shoeboxes when they’re handed out in the nearby cultural centre later in the afternoon. Yaroslava (“Call me Slava; everyone does”) invited us into her home and introduced us to her three kids: Maxim (14), Natasha (10) and Andrez (12).

Slava and her family only moved into their two-bedroom flat a month ago. Her husband Nikolai made all their furniture (he works as a security guard, and was at work during our visit). In the kitchen, one burner on the gas cooker had been left on to help warm the flat up a bit. An accordion and a balalaika took pride of place in the front room – along with Kesha, a beautiful karella (a bird similar to a cockatoo) with a yellow head, a grey back, and a little orange blob on either side of her little face. Kesha sat quietly in her cage, not saying a word. I wasn’t sure whether that was because she doesn’t talk to strangers, or if there was some beef between her and Murchik, the family’s rather enormous grey cat.

The second distribution of the day takes place in the cultural centre, which was built in 1984 and is used for a variety of community events. Nikolai (the director of the centre) gives me a guided tour of the centre, which kind of symbolises the village’s decline. On the wall there are pictures of what it was like in the old days, and of the orchards, tobacco plantations and bee-keepers who once lived and worked here. When I visit the gents’, I find that they’re using old books as loo paper. I can’t read Russian, so I don’t know how important the books are. But all the same, something about that level of desperation just feels wrong.

The guys give out 240 shoeboxes this visit. After they’re done, I chat with a couple of young mums, including Marina (one of about 500 Marinas I encounter on this trip – including the Marina who’s been translating for me). She’s married to a fireman and brought her 18-month-old baby girl along (“She’s always hungry, my little girl. She’s the first child in our family.”)

“You know,” Marina says with a smile, “it’s very important for our village that you people came, because our children here don’t get to meet many people, and don’t get much from people round here. This is a big support for us. It’s a big help. It shows our kids that there’s something more than what they have here.”

Photographs here were taken by David Lund. Check out his art an’ ting here.