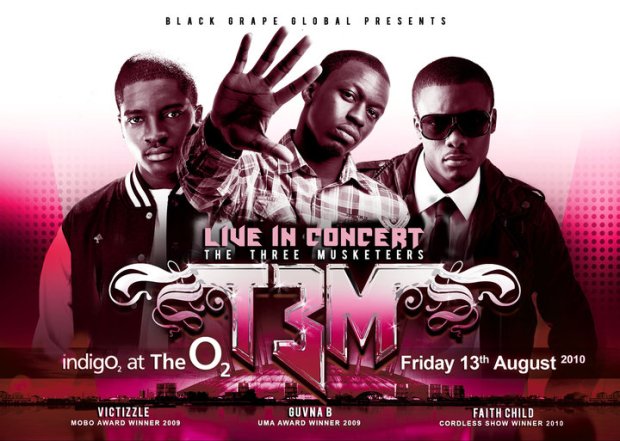 As I write this, we’re just seven hours away to doors open time at the IndigO2, for one of the most eagerly anticipated gospel gigs to take place in the UK – at least as far as I can remember.

Faith Child, Guvna B and Victizzle are just three of the wave of urban acts that have injected some much needed new energy into British gospel music (more specifically, the ‘urban’ rap/grime/garage end of it) in recent years. Tonight, they’re the joint headliners at the prestigious venue, performing under the collective moniker The Three Musketeers (T3M).

The closest I’ve come to making a new year’s resolution in recent years was my decision last year to “do one crazy thing every month”. I think it’s that part of me that admires these three men the most. For three young artists known for ‘Gospel grime’ (a niche within a niche, if there ever was one) to say to themselves, “Let’s put on a gig at the O2” – that’s crazy talk right there.

Crazy it might sound, but it’s certainly not an unreasonable ambition – or even a new one. Nine years ago, I spent a weekend in Holland and met a few Dutch gospel artists. I asked them what their aspirations were, and one of them said, “I would really love to see Dutch Gospel artists put on a concert in Ahoy.” (That’s the 10,000-seater arena in Rotterdam; the venue where Destiny’s Child’s Live DVD was shot, if you’ve seen it) Simply put, the aim of any artist – Gospel or otherwise – is to sing in front of as many pairs of ears as possible. If those ears are linked to hands that are willing to pay you for your trouble, even better.

A lot has been said and written about British Gospel music – and not all of it has been good. It’s the poor relation; the kid whose best has never been good enough for an audience that willingly gobbles up anything that comes from Stateside and bears the ‘Gospel’ label – regardless of whether it’s actually any good. In such an atmosphere, any artist who ignores the naysayers and steps up in such a big way deserves all the support they can get.

The guys’ choice of name speaks volumes too. In my years covering gospel music both in and out of the UK, I’ve always found the British gospel rappers to be the most shining example of a body of brothers (and sisters) working together in unity. I read The Three Musketeers in school, and was always struck by the Musketeers’ motto: “All for one, and one for all.” In my view, these rappers have been living the Musketeers’ motto all throughout their careers.

I bought my ticket a couple of weeks ago (Victizzle sold it to me in person, in the middle of Oxford Street. That’s how dedicated these guys are!). Tonight, I’m going to be at the ringside, blowing my vuvuzela and having a good time. Why don’t you come and join me?

Chesham-based writer, radio producer and music aficionado. Co-author of the book Closing Ranks and producer of the radio documentary The Syrians and the Kindertransport, amongst other things. View all posts by George Luke