Since I’m writing about a religious topic here, I think I ought to start with a confession.

I may be a God-botherer, but I’m also a pragmatist. If I’m miles away from home and it’s cold, wet and dark outside, I don’t care what’s written on the side of the first bus that comes along; I’m taking it. And that’s exactly what I did one Saturday night/Sunday morning last winter, after an awesome Dele Sosimi gig in east London: I (whisper it) rode home on one of those ‘atheist’ buses several Christian Facebook groups were urging me to boycott at the time. 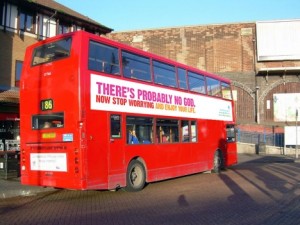 The “there’s probably no God; now go and get plastered” (or whatever it said) bus ad campaign is now just a vague memory for most of us. But a follow-up to it has been launched to coincide with the festive season… and so it was that a few days ago, I found myself in Foyle’s bookshop in central London, for the launch of a book titled the Atheist’s Guide to Christmas. 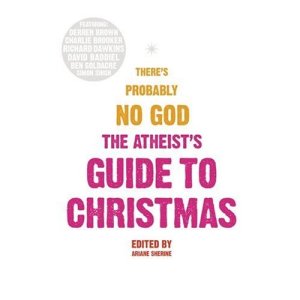 the book) was host for the event, along with guests Richard Dawkins, AC Grayling, David Baddiel and Derren Brown – four of the book’s 42 co-authors – who read the essays they’d contributed to it. Apart from acquiring a new spiritual dilemma for myself (will I go to hell because I think Ariane Sherine is hot? I’m sure me fancying her is what my team calls “being unequally yoked”), I found the evening simultaneously thought provoking, amusing, and in places deeply tragic.

The thing that stuck out most for me was how similar atheism is to the religions it is so opposed to. Guess what? Atheists argue over dogma and doctrine just like Catholics and Protestants, Sunnis and Ahmadis, or Orthodox and Reform Jews do. Boy, do they! During the Q&A session that followed the readings; in the lift; on the street walking to the Tube station… Even more interestingly, even in a roomful of people generally disposed to believing that faith is irrational, there were a fewwho were brave enough to admit that there were some mysteries cold, rational thinking could not sufficiently explain.

It’s been said that the ‘New Atheists’ (is that the same as ‘New Labour’ or “new Windows operating system”?) are every bit as intolerant in their atheism as religious fundies are in whatever religion they subscribe to. They certainly have an equal amount of smugness about it, that’s for sure. I mean, what’s the difference between David Baddiel’s blanket statement that people who profess a faith are “all wrong” and the ranty Imam who labels all non-Muslims “infidels”?

Derren Brown made a passionate argument for people to be kind to those around them – not just at Christmas, but all year round. The advantage atheists had over religious people, he said, is that religious people did good deeds because they expected a “reward from God” whereas atheists didn’t have any such carrots to motivate them, and so had purer motives for the acts of kindness they did. Sounded good at first – but then he had to go and spoil it by mentioning the “benefits of kindness”… and it was then that you realised that he was basically preaching Karma without the Buddhism. Derren, you say “benefits” and I say “rewards from God”. Tomayto, tomato…

Having said that, some of the contributions made me wonder whether religion (Christianity in my case) wasn’t partly to blame for people’s unbelief – and no, I’m not referring to that lame joke about Dawkins being the second biggest cause of atheism in Britain after Cliff Richard (and on the subject of lame jokes: Richard Dawkins, stick to science and leave comedy writing to the experts. That Jeeves & Wooster skit was terrible). I found myself feeling for Derren Brown when he said he’d been a Christian for many years, but had packed it in because he’d found himself unable to defend his faith intellectually as he had wanted to. The un-intellectual (sometimes anti-intellectual) streak I find in some Christian circles bothers me too, but I’ve stuck with it. I even found myself agreeing with something Richard Dawkins said: that Jesus taking the punishment for sins he hadn’t committed himself “just doesn’t add up.” It doesn’t – but then, forgiveness and love (and the things people do for them) have never “added up”.

On the other hand, I found AC Grayling’s claim that “once you’ve achieved a few major things in your life, you have less of a need for a God figure” seriously lacking. Four years ago, I met Dr Charles H Townes. For anyone who doesn’t know who he is, Charles Townes is a Nobel Prize-winning American scientist, credited with the discovery and development of the laser. In the 80s (at the height of that USA vs. Russia who-can-wee-the-highest contest we called the Cold War), he helped persuade then President Ronald Reagan not to flood the planet with strategic nuclear weapons, as he was being advised to. Those are pretty big achievements by anyone’s standards, yet Dr Townes had an active Christian faith – a faith he still holds on to now, well into his 90s. And let’s not forget Desmond Tutu, who’s still a bishop in spite of his Nobel Peace Prize and other accolades. Maybe “achievement” is just relative…

I received quite a few responses when I reviewed the launch for a Christian magazine. Many of them were positive (and that’s always good to have), but a lot of them simply parroted the usual cliché responses Christians come out with whenever stuff of this nature is discussed: “They would never say things like this about Mohammed”, “Why do they hate Christianity so much?” – you know, the usual…

Here’s the thing (at least, “the thing” as I see it). This martyr mentality isn’t doing Christianity any good, and statements like that only serve to prove that we’re a bit too self-absorbed and not really listening to what’s going on around us. The so-called ‘militant atheists’ aren’t singling Christianity out; they’re opposed to ALL religions. So yes, they do say ‘things like this’ about Mohammed. And about Vishnu. And G_d. And Shiva, The Force and the Flying Spaghetti Monster. Enough with the whining already – and can we please have one Christmas without any complaints about shopping malls not having Christmas trees, or someone resurrecting that urban myth about some council somewhere trying to change the holiday’s name to ‘Winterval’? (It’s not true. I’ve checked). This whiny victim mentality does nobody any good; it just trivialises the very real persecution Christians face in places such as Sudan, Eritrea, Burma, North Korea and Turkmenistan.

Happy Christmas, whoever you believe in (or don’t)…