The other day, I went – somewhat reluctantly – to a film screening at the Albany theatre in Deptford. 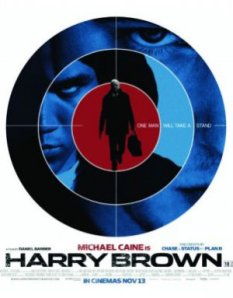 Gary Young describes Harry Brown as “a British Death Wish” and he isn’t far wrong. It’s extremely dark, depressing and very, very violent. Michael Caine turns in a flawless performance as the ailing ex-marine whose life revolves around visiting his terminally ill wife in hospital and having a pint and a game of chess with his old mate Len. The only characters you feel anything for are Harry and Len, whose brutal murder is the tipping point that turns Harry into the Equalizer of Elephant & Castle. The various hoodies, pimps, drug & arms dealers and low-lifes of some description are either so grotesque or so irredeemably evil, they might as well just have giant multicoloured neon signs saying “HATE ME” stuck on them.

As you can probably guess from what I’ve just said, Harry Brown wasn’t my cup of tea (hence my initial reluctance to go to the screening). On the other hand, I cannot recommend English highly enough. The last time I’ve seen such a non-patronising portrayal of deaf characters in a film was in Four Weddings & a Funeral. And that was some time ago…

I found the Q&A session quite insightful. I’ve spoken to a few filmmakers and writers in my time, and as I grow older, I find myself believing in hard-and-fast rules less and less. This Q&A session just reinforced that further. Gary’s viewpoint is that people don’t go to films to ‘learn’ stuff, and he seemingly has no time for any of that “a film must have a message” nonsense. He also didn’t seem to care much for issues such as whether a filmmaker has a responsibility in how they portray certain groups of people. In this regard, he was the polar opposite of Tarun Thind, who set out to make his film with the intention of countering the negative image of ‘hoodies’ so prevalent in the media today. While I can see both their points (and I’m not just saying that to sit on the fence), the difference in the characters in both films is enormous; Tarun’s ‘hoodies’ are a lot more human than Gary’s.

But Gary is right, up to a point. A writer works best when s/he writes what’s on his or her mind – not when trying to “write to order” or deliberately trying to shoehorn a moral into their work. “Write what’s on your heart” is the best advice you can give any writer. And I suppose it is possible to make a film and not have some sort of agenda beyond wanting to create something you find entertaining. I’ve seen some of the work done by filmmakers who claim that “all films have agendas” (especially some of the new breed of Christian filmmakers), and a lot of the films they make do end up being very preachy.

But when it comes to the issue of responsibility in how you portray people on film, there are personal reasons why I can’t see Harry Brown in such an objective manner as Gary suggests: The Heygate Estate where it was shot is literally five minutes’ walk from my home (in fact, I can remember walking through it while it was being prepped for shooting this very film, and wondering if it was 1Xtra shooting another of their “music for the sink hole estate massive” trailers). My brother and sister-in-law had their first home (and first child) there. A cousin of mine lived there for many years with her husband and baby daughter before eventually emigrating to the USA. It might be a dump, but Harry Brown made it look like the tenth circle of Hell (and trust me, if it really was that bad, I wouldn’t walk through it as casually as I do on a very regular basis). I know it’s fiction, yada yada yada – but I bet if someone shot a film somewhere in Newcastle that Gary had fond memories of growing up, and made it look that nasty, a small part of him would go “Hey – that’s out of order!”

The film opened in the US this week, and I’ve already read one review from there saying it was set in a “slum”. That reviewer really ought to see the ‘slum’ being built on the other side of the road…

Error: Twitter did not respond. Please wait a few minutes and refresh this page.