About a week ago, “#09memories” was a ‘trending’ topic on Twitter. I’ve never really done the ‘recap of the year’ thing that much in the past (as much as I do like reading other people’s), but found myself spending the best part of an evening sharing my memories and reading those of others. It seemed a bit of a shame just to let one audience see them in short bursts, so I compiled them into a list to post here – expanding on a few where I felt the 140-character limit didn’t really let me say what I wanted to.

So in no particular order (well, maybe slightly chronological, but only just; actually more emotional than chronological), here are some of my standout memories – both great and not-so-great – from 2009:

• Meeting the adopted little sister I never knew I had for the first time.

• The whole Celebration fam going to Hereford and spending a day with Cynthia, barely three months before she passed away.

• Doing the last DJ slot in the Blue Nun wine bar at the Greenbelt festival.

• Going to MIDEM for the first time in 14 years, and discovering great music from Sonnyboy, Ndidi Onukwulu, Yom, Monica Giraldo & Charlie Winston. Also seeing Duke Special in concert, and celebrating Barack Obama’s inauguration with members of the American Association of Independent Music. MIDEM has a reputation for being all about the business and not so much about the music. But it is possible to find decent music there, if you look hard enough.

• Discovering London’s coolestest venue, the Shunt Lounge… only for it to close 10 months later.

• The Operation Christmas Child trip to Swaziland – and the delighted screams of the kids as they opened their shoeboxes.

• Arriving in Jo’burg airport en route to Swaziland; hearing ‘Viva la Vida’ on the PA system and thinking, “Coldplay? This can’t be Africa.”

• Giving career advice to the Swazi schoolgirl who told me she wanted to be a journalist when she grew up.

• The loud cheer that erupted in our minibus as we drove into Mbabne (the Swazi capital) and saw a branch of Nandos. 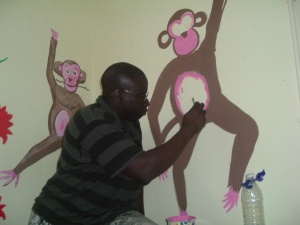 • Painting and decorating the community centre in a Delhi slum; logging on to the internet and wondering who this Susan Boyle woman was, and why so many of my Facebook friends had become fans of hers.

• Riding an elephant up to the Amber Palace in Jaipur.

• Visiting the Taj Mahal – and not really believing our tour guide’s story about how he’d told Danny Boyle off because “that scene in Slumdog Millionaire made Indian tour guides look bad.”

• Being mistaken for Ice Cube by some of the kids in the slum where we were working.

• A pimp in Nashville offering me girls an’ ting. That’s the last time I stay in a Motel 6!

• Driving a van in Atlanta with no satnav, and introducing my passenger (my 11-yr-old niece) to the world of Bill & Ted and their “be excellent to each other” philosophy.

• Lou at the Bridge Bar in Beckenham.

• Several trips to Paris, during which the Starbucks on Boulevard St Germain became my office away from home.

• Curling up in bed ready for a good night’s kip, then receiving a txt msg saying Michael Jackson had just died…

• … and then receiving another text from the same person two hours later, informing me that Farrah Fawcett had also died (at which point, I responded with “You’re really the herald of good tidings tonight, aren’t you?”).

• Being asked to talk about MJ on Radio 4…

• … then receiving another phone call from Radio 4 a few hours later (after I’d prepared what I was going to say), saying they’d found someone else to do it.

• Discovering a new way to watch TV: reading your friends’ sarky status updates and/or tweets about the show while it’s on. Sometimes you didn’t even need to watch the show in question; the running commentary told you everything you needed to know!

• One of the deepest films ever (Downfall) being turned into a series of often sick “Hitler reacts to…” jokes on Youtube.

• Dizzee Rascal losing what little respect I had left for him with asinine comments about the preparations for the 2012 Olympics.

• The realisation that people actually read my blog!

• My big ‘fanboy’ moment: shaking Nile Rodgers’ hand at Chic’s gig at the Forum (I now use his plectrums to play my guitars – when I can be bothered, that is. I must do more of that – and more seriously – in 2010).

• Africa Oyé in Liverpool. Meeting and working with Maya; ‘vibing’ with Daby Touré (pictured) and doing the most hilarious interview I’ve ever done (with an extremely well-dressed artist who will remain nameless).

• The last ever Delirious? gig – and meeting Mr. Tommy Sims at the after-party.

• Seeing people’s nastier sides come out after certain celebrity deaths. Not nice at all.